PRESS FOR ‘THE CRUX’

“With the release of his quintet’s debut album The Crux, saxophonist and clarinettist Tommy Andrews sets out his stall with great confidence…a great example of an emerging talent stretching his wings” - JazzUK

"[A] free-flowing, idiom-mingling debut…bridges the free-flowing yet methodical spontaneity of Lee Konitz, and the staccato, more mathematical methods of Steve Coleman and the M-base tradition. It's a smart, sophisticated debut from a UK newcomer with prospects." John Fordham, The Guardian

“The Crux” is a highly promising début from an instrumentalist and composer we are surely destined to hear a lot more of. It’s an album that impresses in terms of its scope and of its leader’s maturity as both a musician and a writer. " - Ian Mann, The Jazz Mann

“The Crux is a well-crafted album, with both writing and playing showing a mature combination of technical skill and a willingness to entertain.” – All About Jazz

“The vibe is infectious…spirited piano and unison guitar and sax lines making way for the leader’s aqueous soloing which cries out for extended, dramatic development in a live setting.” – AP Reviews

“Andrews’ music is as intelligent as the thoughts behind it…and, most important of all, it has an original and identifiable character all of its own. A thoroughly absorbing and pleasurable listen – a fine album indeed.” Peter Bacon, The Jazz Breakfast

"[Tommy] is an intuitive improviser again like Speake, and his writing integrates group interplay with soloistic space so instinctively. Cerebral jazz that keeps you listening to reach the heart of the matter just as you guess Andrews intends." Stephen Graham, Marlbank

“I think The Crux is a fine debut album from the Tommy Andrews Quintet. It is a democratic album with contribution well-spread amongst talented band members who clearly work well together. This is an impressive first release that deserves committed listening time to fully appreciate the music.” Ian Maund, Sandy Brown Jazz Magazine

"Tommy has an ease that makes the sax an extension of his physical body. He breathes/it breathes, and melodiously so." Debbie Burke, Jazz Author

"Cool and contained...His three pieces from the band’s new album The Crux had attractively side-slipping harmonies. The shade of the late lamented trumpeter and composer Kenny Wheeler was never far away." Ivan Hewitt, The Telegraph. 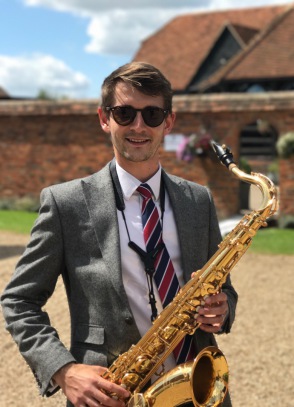 Tommy Andrews is an award-winning multi-instrumentalist, composer and educator. Graduating from the Guildhall School of Music and Drama with a First Class degree in Jazz saxophone, he is now sculpting a varied and busy career.

As a bandleader and composer, his first major mark on the U.K. contemporary jazz scene came about with his ‘smart, sophisticated’ (John Fordham, The Guardian) ‘mature’ (All About Jazz) ‘cinematic’ (AP Reviews) and ‘cool and collected’ (Ivan Hewitt, The Telegraph) album release ‘The Crux’ (2014, Jellymould Jazz). This debut release gained glowing press in the U.K. and U.S. along with national radio play, notably on Julian Joseph’s ‘Jazz Line Up’ for BBC Radio 3. The quintet promoted the release with two successful U.K. tours during 2014 culminating in the quintet’s debut London Jazz Festival performance.

Tommy has performed at some of the U.K.’s most prestigious venues, including Ronnie Scott’s, Buckingham Palace, the Purcell Room, the London Palladium, the Royal Festival Hall, the Vortex, the Cadogan Hall, the 606, Pizza Express Dean Street, the Queen Elizabeth Hall, St. John Smith’s Square, the Wigmore Hall, the Roundhouse, the SSE Hydro Arena, LSO St. Luke’s, and Symphony Hall.

Tommy is also an experienced educator, holding a 3 day Saxophone and Clarinet position at King’s College School (The Times Secondary School of the Year 2014), as well as freelance coaching all over the U.K. including The Purcell School, The Guildhall School of Music and Drama, the Barbican Centre, IMPULSE (with Alison Cox OBE) Eltham College, Ravenswood School and on the Music Makers Summer courses.